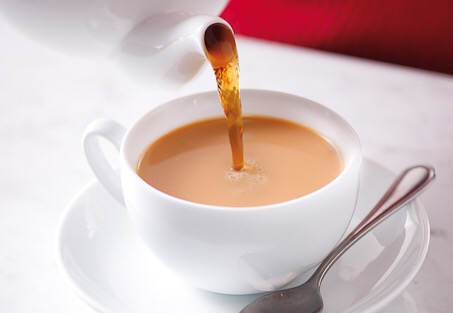 It’s true, you know. However stressed and difficult life gets, take a few sips of tea & it doesn’t seem quite so grim.

Whenever there’s a crisis, friends gather around the distraught person. Other cultures might weep with a person who is weeping. Some might rage against the injustice or the more neurotic confidante might try a few nervous jokes. But the British? After a few seconds panicked pause, the best thing to say is always “Shall I put the kettle on?”

Douglas Adams, author of “The Hitchhikers Guide to the Galaxy”, very wisely noted that it is a mistake to think you can solve any major problems just with potatoes. However, tea is another matter. When a Brambleweeny57 sub-meson brain is linked to an atomic vector plotter suspended in a nice hot cup of tea, the possibilities are limitless!

It is a mistake to think you can solve any major problems just with potatoes. Douglas Adams.

Having travelled in France & Germany, as well as Brazil & Paraguay, I can safely say that the rest of the world just does not get the true value of a nice hot cup of tea. You travel round a place that’s hot & dusty, or just plain busy. Then you get back to your hotel room to chill and you need a good cuppa. It’s not a desire. It’s a need. I’d judge a hotel exclusively on the quality of its tea provision. There may be a bit of damp, a tiny loo and a lumpy bed. But all can be forgiven if there’s Early Grey and English Breakfast.

I’m beginning to think that, for me at least, sitting down with the original amber nectar  is about a sense of security, belonging. That all is right in the world. I’m in hospital at the moment, having had a rough night. But the night fears subside when that first mug of Builders tea is plonked on my tray. I’m sure it’s not just me though. I’ve found this great little poem.

midnight tea stay with me, let me dream away and flee, let me drown in your mug, your hot water is my hug.         Maura

And it’s with a growing sense of horror that I realise there might not be tea in heaven! It’s only us who have this obsession. And it’s only these last few hundred years. So unless there’s a section set aside for 20th Century Brits, we might be in trouble.
This might sound like heresy. But let me teeter a little closer to the cliff edge. Maybe, just maybe, we won’t need tea. There. I’ve said it. The heresy is uttered. If tea gives us a sense of belonging, of relaxation, of battling night time fears and bringing peace to stressful situations, we might be alright without it.

The only thing that has a similar effect on me to tea is prayer. Sit me down to pray with a mug of tea & I’m in a state of bliss. As I pray, God’s love calms my fears. Putting my anxious thoughts into the hands of the Lord helps me gain perspective. Knowing Jesus is close by his Spirit, helps me see things more clearly and gives courage to grasp hold of the tasks of the day.

And in the life to come, I’ll see God face to face. My sense of security, of belonging, that I get with God now as I talk to Him in prayer, will be complete then. I won’t need a tea supplement.

Can you imagine it? A time when you will not need tea? Because life will be bliss without it.

But for now, there’s Teapigs & Twinings…